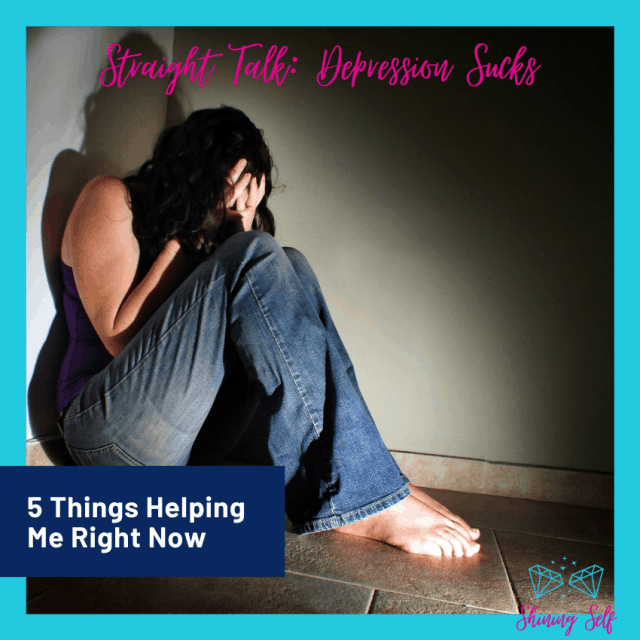 Depression sucks. Sometimes it hits me out of the blue. Other times, it'll slowly creep in and I can pinpoint when/how it started. If you struggle with depression or have ever struggled with it, you will probably relate to some of what I'm about to share with you…

Waking up, rubbing the sleep out of my eyes with a fleeting thought of getting up & starting my day. Instead, deciding to stay in bed and go back to sleep.

Next thing I knew, almost two weeks had passed and this was pretty much the norm. Or the boyfriend getting home from work, around 4:30pm, and asking why I was in bed… again.

That “should” have been the first sign something was off… but hindsight is 20/20.

No Interest In Intimacy

The lack of sex and wanting nothing to do with advances from the boyfriend… first one week went by, then two, then three, and now it's been over a month.

This one started before anything else but because I'm having some other symptoms (messed up periods or sometimes lack of a period and hot flashes – just to name a few) I don't know for sure it's depression related or menopause (yes, women in their 40's can go through it!) or a combination of both. So this one wasn't an easy ‘oh this “should” have been another sign.'

And thankfully, I have one hell of a patient, kind, loving, understanding man because… well, yeah a month! And that's all I'll say about that because TMI (too much info lol).

Then came the not wanting anything to do with social media… including my torrid love affair with my beloved TikTok.

I didn't have the energy or the desire to connect with anyone – not just on social media but in general. It all felt overwhelming and exhausting.

(Disclosure: I do have a love/hate relationship with social media and had started pulling back because of all the fat shaming comments the trolls were leaving me prior to the funk setting in.)

No Interest In Taking Care Of Myself

The more I slept and stayed in bed the more I cared less if I ever got out of pajamas or if I took a shower.

When the boyfriend said “when's the last time you showered?” I knew it was time to shower!

Then Came The Meltdown

It was early afternoon Friday, November 13th. I had just read about the upcoming stay at home orders that were going into effect AGAIN.

I felt so lost. Overwhelmed. Panicked. Out of control. Like the wind had been knocked out of me. And then the sobbing started. I couldn't take it anymore. I was done.

And when I say I was done… I mean I was done with wanting to be here and living like this.

Of course that text cued my mom & sister in that I wasn't mentally in a good place. And they both were calling immediately. And as I was on the phone with my mom the boyfriend got home from work (that day happened to be the day he had to leave early to get home for a virtual tele-health appointment!).

I don't remember much of any of the conversations from that day but I do remember the boyfriend telling me we needed to figure this out.

(Side note: those upcoming stay at home orders weren't the only thing going on in my life – there was/is a lot of other stressors – that just happened to be the straw that broke the camel's back.)

Coming Out The Other Side – 5 Things Helping Me Right Now

Now I'm starting to come out of the funk and every day feeling a little more like myself. I'm not as disengaged (I think that's the right word) as I had been.

1. I've started meeting with a therapist.

It's been years since I've seen one and I forgot how helpful they can be. I've only had a few meetings so far but they're helping.

I've had an on/off relationship with journaling over the years and I forgot how much I missed this being a part of my regular daily routine even if it's just to word vomit all over the page to get the crap out of my head! 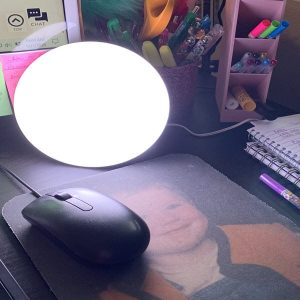 This came about because a friend sent it to me after hearing I'd been having a tough time mentally lately. And let me say, this little device is amazing (pic to the right). I use it every morning for 20-30 mins and it does something to my mood. I don't know how to put it into words. I guess the best way to explain it is all the warmth, from that little beauty shining so bright – I use it at 100%, on my face makes me feel good and puts a smile on my face…. all the reasons I've always loved the sunshine!

4. I've started finding things that make me happy and taking the time to enjoy them.

Right now, it's my LED lights all over my office – on my computer monitor, around the second desk in my office, around my window. My favorite thing to do in the evening now, once it's dark outside, is turn off my office light and sit in my reading chair and take in all the changing colors of the lights. It puts a smile on my face. 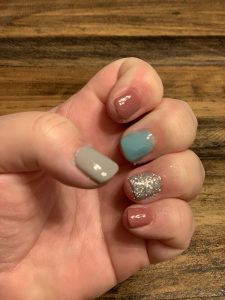 5. Finding something new to try/do.

I've had acrylic nails off and on for 20+ years. It's expensive to have acrylics and monthly nail salon visits so I had recently stopped getting them done. I miss having pretty nails so started researching acrylic nails at home and found a company called Nailboo. I read reviews, watched a couple tutorials, and found a few video reviews on YouTube, from happy customers, showing how easy it was to use their system. I was sold!

Not only was this the perfect opportunity to try something new, but to learn something I had wanted to go to school for many many moons ago! I was surprised to see I could get a starter kit – everything needed to get started plus four colored dips – for less than a hundred bucks. Yes, it was a bit of an investment up front but it was a one time payment and the items will last quite a while!

I need some more practice but for my very first time I am happy with the results (pic to the left).

What about depression medicine?

Maybe you're wondering if I've started taking depression meds. I have not. The reason I am choosing this is because it's the best choice for me because of hwo my body reacts to medicine. In years past, when I had major depressive funks like this one my doctor prescribed me meds and things didn't go well. The medications made my suicidal thoughts worse. First was Prozac, then came Zoloft and the third was Lexapro. Each one of them affected me negatively, although the Lexapro had a lot less severe effects than the other two did.

So, for me personally medication was not an option. Now, having said that I do want to say that in all the times, over the years, I've struggled with depression and having suicidal thoughts I've always been too afraid to actually do something to myself and for obvious reasons this is a good thing and is what has probably been part of what saved me over the years. I know a lot of people aren't that ‘lucky' (that's a shitty word to use but I couldn't think of another one) and the reason I decided to open up about this funk is because if just ONE person sees this and feels a tiny bit of hope, then what I'm going through is worth sharing! There is hope – you just have to find something, anything, to hang on and cling to until you start feeling better. I know that is over simplifying the complex issue of depression of and mental health but it does start there – finding something to be hopeful/look forward to it.

And I want to leave you with one last thing…

Your mental health is important – do NOT ever feel embarrassed or ashamed if you're struggling mentally. If you're struggling with depression please seek help! And if you are having suicidal thoughts please SEEK HELP NOW. You can call the National Suicide Hotline at 800-273-8255