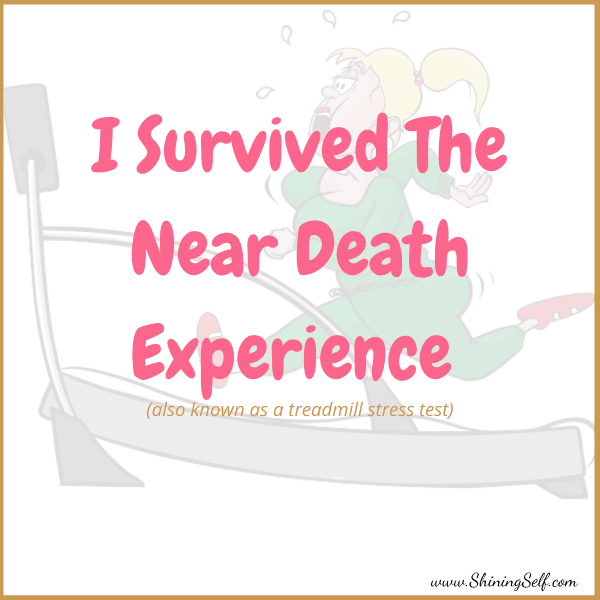 The Words I Didn't Expect to Hear!

Talk about a sobering experience and wake up call. I mean holy hell I'm only 44!

Needless to say, A LOT of things have changed in my life since then but I won't bore you with all that because that's not what this post is about.

So, let's move along…

I had to have a treadmill stress test done on January 13th. I'm here typing this which means I obviously survived it.

I know. I know. I probably shouldn't be joking about still being here with everything that has happened recently but laughing is good for the soul!

Kidding aside, the nurse was telling me it would last for a maximum of 9 minutes and a minimum of 6 (as long as my heart rate reached 160 beats per minute – that didn't take long – and he got all the diagnostic info needed). I was like oh that's not gonna be a problem. He grinned and continued talking, non nonchalantly mentioning ‘well a treadmill stress test is a lot different than normal every day walking'.

Dude, did you not see how short my legs are?

That pace is gonna require me to freaking run or at least jog to keep up and that's surely going to kill me… at least kill my ego.

But I'm a champ dammit so I was gonna handle this like a pro. A pro athlete…

… uhm except I'm NOT. And let's just say the 20-40 mins of walking I've been able to do doesn't cut it for any kind of stress test training – just freaking trust me on this one, ok!?

At the highest incline of 15 and fastest pace of 3.74 miles per hour I imagine looking like a little oompa loompa running after all that chocolate and candy they were in charge of in Willy Wonka's Chocolate Factory (which is totally irrelevant but sounded good & oh my freaking lanta do I ever miss chocolate – stupid heart attack had to take it away from me. And don't you dare recommend dark chocolate to me because I hate that stuff lol).

Anyway back to the story and picking up where we're at the point of no return (seriously, I'm pretty sure I could have died that day on that treadmill… or I'm just being a drama queen. Yeah, probably the latter.)…

3.74 mph & a 15 incline was quickly escalating my near death experience!

When I say it was brutal… that's putting it nicely.

Or I am just a serious wimp.

Oh and I did not make it the full 9 minutes! Because I know you were wondering about that.

I tapped out at 6 minutes and 16 seconds, aka (also known as) the instant he gave me the thumbs up sign they had all the diagnostic info needed.

The moral of the story of my near death experience (aka a treadmill stress test)?

If you ever have to have one (I hope you don't), you better start preparing now and training for that event.

I don't even know what the hell that means.

But it was a good thing – that's the result the nurse said they wanted.