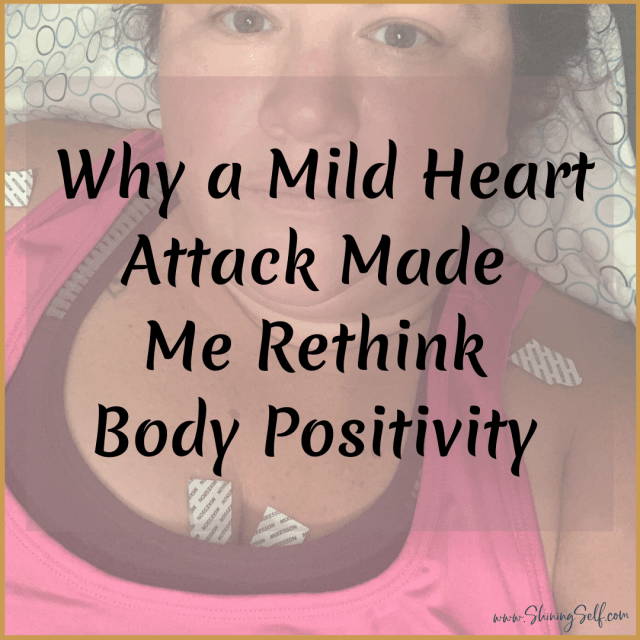 Body positivity and a heart attack… not exactly two phrases you would think go hand in hand. In my case, they do. And it's because of the heart attack I started rethinking all this body positivity movement stuff. Now, before you go throwing stones my way… please hear me out, it's probably not what you are expecting or thinking. Let me explain.

I recently suffered a mild heart attack. So mild, I didn't even know it was happening at the time. Except, I think I did – I had been feeling really weird on and off but that week it was worse than it had been. Finally, Thursday morning December 19th 2019, as the boyfriend was getting ready for work I said “I think I need to see a doctor” and off we went.

The day was a bit of a blur. First test was an EKG. It had to be done a few times because first reading was off and they wanted to make sure the wires weren't causing a wacky reading. Nope, the second reading was the same – showing signs of a heart attack. Then it was off for blood work, or a certain blood test. One that would tell if the heart attack had happened within the last 24 hours. At this point, I didn't understand why it mattered if it was within the last 24 hours or not… I had a heart attack!

Test came back with a normal reading meaning the heart attack was ‘old'. I was also have some blood clot symptoms in my leg so off to an ultrasound next. No blood clot. Great… but what the hell was causing the mysterious pain in my leg? Anyway, the day was long. I was scared shit less. I was tired of being poked and prodded.

I'm going through a bunch of emotional and mental turmoil. How the hell am I supposed to continue spreading the message that I believe:

… when I'm now having to make changes in my life that go against some of those things I believe.

I say I went about it the wrong way, here's what I mean:

I Distorted What Body Positivity Really Meant to Me

Before heart attack, I knew what I was doing wasn't what my body wanted or needed. I knew I was putting things into my body that weren't very nutritious and I knew the risk I was taking being pre-diabetic, having high blood pressure and borderline high cholesterol. I wasn't taking care of myself and I knew it but continued to do it anyway because damnit I was loving my body, fat rolls and all, and embracing the fact I didn't have to diet any longer to fit in. I was showing others I could love my body as it was. I was saying body positive this and body positive that.

Part of being body positive, to me, means taking care of myself too… and that I was NOT doing.

Now in the aftermath of the heart attack I am still a huge hell yes to the body positivity movement… I've just had to take a new approach to how I view it and share my message.

Body positivity & what I want to leave you with today…

Everybody has a different opinion, view and definition of what it means to them. That's ok. I've decided that it's an individual and personal journey to each and every one of us. But please, don't take after me and let embarking on the body positivity movement turn into “permission” to say F*CK it to listening to your body and taking care of you. Love yourself enough to do what is healthy for you and suits your body and your needs!

The moral of the story – don't be willing to put your life at risk for the sake of a ‘movement' you believe in… like I did!

And last but not least, I am still 250% all about the body positivity movement and the importance of sharing my message and helping other women to see and learn that they can take up space confidently, comfortably and apologetically… just as they are! Look at this group of body positive babes doing just that!